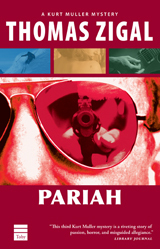 The Kindle edition and the Thomas & Mercer paperback edition of the third novel in the Kurt Muller mystery series, Pariah, are available now. To order, click here.

The Kindle edition and the Thomas & Mercer paperback reprint of Pariah are now available on Amazon's Thomas Zigal page.

"I am in awe of Zigal's ability to break your heart while entertaining the hell out of you. Pariah evokes the poignancy of the lost '60s and the money-madness of contemporary Aspen with nonstop plot and beautiful writing. I was guessing the outcome all the way--and then I didn't want it to end."

"A mesmerizing read. Zigal entertains us with tight prose and a hair-raising plot.... His talent culminates in a book that is well structured, taut, and downright creepy."

"Book by book, Muller, his deputies, and the environs of Muller's Aspen become more complex, nuanced, and engaging."

"Mystery writers like Thomas Zigal are the salvation of a flailing genre."

PERSPIRING THROUGH HIS rented tuxedo, Sheriff Kurt Muller stood on the dais in the hotel ballroom and smiled gamely at the audience murmuring under dimmed chandeliers. From the soft-glowing dinner tables Aspen society women were raising their jeweled hands, bidding on a date with him, and the banter between parties was lively and contentious.

"Three K!" waved a waxen grande dame whose young husband had perished the previous spring in a hang-gliding accident. She wiggled her fingers at Kurt and flashed a naughty smile, and in that moment he understood why the gigolo had chosen to sail into a rock wall.

Corky Marcus was sitting with his wife at a table near the dais. He gave Kurt a sympathetic shrug that said Hey, whatever. Corky was the department's legal counsel and this appearance was his brilliant idea.

To beat the recall vote you'll need more visibility, Kurt. A boy-next-door image. You'll have to throw Frisbees in the park and kiss the rich gals on the cheek and show up at all their charity fundraisers. The numbers are too close to call.

Over the summer a popular county commissioner named Ben Smerlas had circulated a petition to recall Kurt as sheriff, and the movement had received the four hundred names needed to place the issue on the November ballot. In two weeks the people of Pitkin County would decide by a simple majority vote if they wanted Kurt Muller to remain in office.

"I hear three thousand dollars!" acknowledged the Playmate. Notorious for her gaudy '70s apparel, she nevertheless appeared modestly contained tonight: silk turban, slinky white gown hugging her celebrated body, pearls dipping into deep cleavage. "Come on, ladies! Is that the final offer for a night of bliss with this studly gentleman of the law?"

She hooked the auction gavel behind Kurt's neck and pulled him closer, shoulder to shoulder. "You know what they say, girls. Cops know how to drive their unit."

There was a bawdy howl from the audience. Kurt glanced again at his attorney. Corky Marcus was history.

Two aging matrons with more tucks and lifts between them than the Gabor sisters began bartering in hundred-dollar increments. Kurt felt like a sofa at a yard sale. He raised his eyes and prayed for a hotel fire to end this misery.

The silence lingered. She looked from one bidder to the other and lifted the gavel. "Okay, ladies. Three thousand eight hundred going once--"

The husky female voice had come from a dark table in the rear. Heads turned. The entire ballroom grew quiet. Kurt thought he might have been hallucinating. The Playmate stepped to the edge of the dais and gazed out over the stirring patrons. "Hel-looo," she said, shielding her eyes from the chandelier glare. "Was that a serious bid or were you trying to buy Carbondale?"

A ripple of weak laughter. Everyone had shifted to stare at the woman sitting alone at an unlit table.

"The offer is ten thousand," replied the woman.

Kurt recognized that bourbon-rich voice. Nicole Bauer, the town's most infamous recluse. She was wealthy, she was eccentric, she had pushed her lover off a redwood deck twenty years ago and got away with murder.

The Playmate turned and whispered in Kurt's ear. "Do yourself a favor, hon, and hold on tight to the railing," she said with a wicked smile. "It's a long drop to the bottom."

AFTER THE LAST prize was auctioned off, a weekend for two at an Arizona mud spa, the orchestra swung into an old Big Band favorite and couples dispersed to the dance floor. Corky caught up with Kurt before he could sneak off to the men's room. "That wasn't so bad, now, was it?" the attorney said, clapping Kurt on the shoulder.

With his unruly mop of hair and sagging, beaglelike face, Corky looked more like a Catskills comic than a lawyer. "I'm trying to keep you in office, man," he said, his eyes small and shrunken behind the thick horn-rimmed glasses. "You don't seem to grok the situation here. Smerlas has the mo'. When five percent of the county signs a petition to kick your tush out, you've got some serious problems with public image."

The issues were simple. Smerlas contended that Kurt was too soft on drug crime, that he had lost control of the Latino immigration problem in the county, and that his department was uncooperative with the DEA, the INS, and other federal agencies who were struggling to clean up the Roaring Fork Valley. Smerlas also maintained that two high-profile murder cases in recent years had hurt tourism in Aspen. A local newspaper poll revealed that a significant number of voters agreed with the commissioner.

"Roll the fucking dice," Kurt said. "I like my chances. The people of this county have elected me three times. They know who I am. I don't care who his friends are, Ben Smerlas had better watch his own ass in next year's commission race."

Corky shook his head. "Smerlas has higher ambitions, Kurt," he said. "Next year he'll be running for the House seat that's up for grabs, Third District. You're his whole platform. He takes you down, his reputation is made."

"Wake up, man, it's the nineties. The old ski bums you used to party with are wearing Rolexes and driving BMWs. They're pissed about the Hispanics using up county services and becoming a burden on the tax base. And guess who they blame for not cracking down on all these scary illegals riding the valley buses? In case you haven't noticed, everyone but you and me is sending their kids to private schools, where they still teach in English."

Carole Marcus approached, wineglass in hand. Kurt welcomed her intrusion. She was a petite, attractive woman with short dark hair gelled and glistening. Standing with her husband, a man barely five feet six, she looked like his matching miniature partner on a wedding cake.

"Jesus, Kurt. Nicole Bauer," Carole said, her small heart-shaped mouth teasing a smile. "Wonder what she'll do with your body when she's done with it?"

He could already hear the jokes from his deputies in the department: Remember to practice safe sex, Kurt. Pack your Glock.

A handsome young man dressed in a dark blue chauffeur's uniform had materialized out of the dancing crowd. "Miz Bauer would like to speak with you in private."

Kurt glanced over at the empty table where she had been sitting.

"Would you come with me, sir."

"Oh, this is perfect," Kurt said, raising his brow at the Marcuses.

"Enjoy yourself, Studly," Carole said with a bye-bye wave.